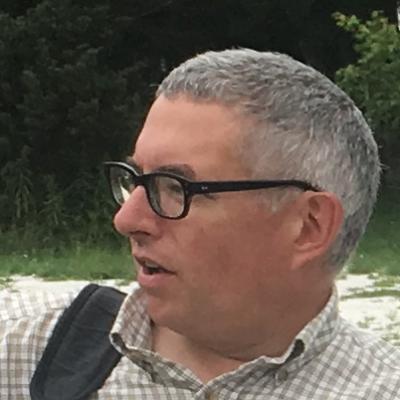 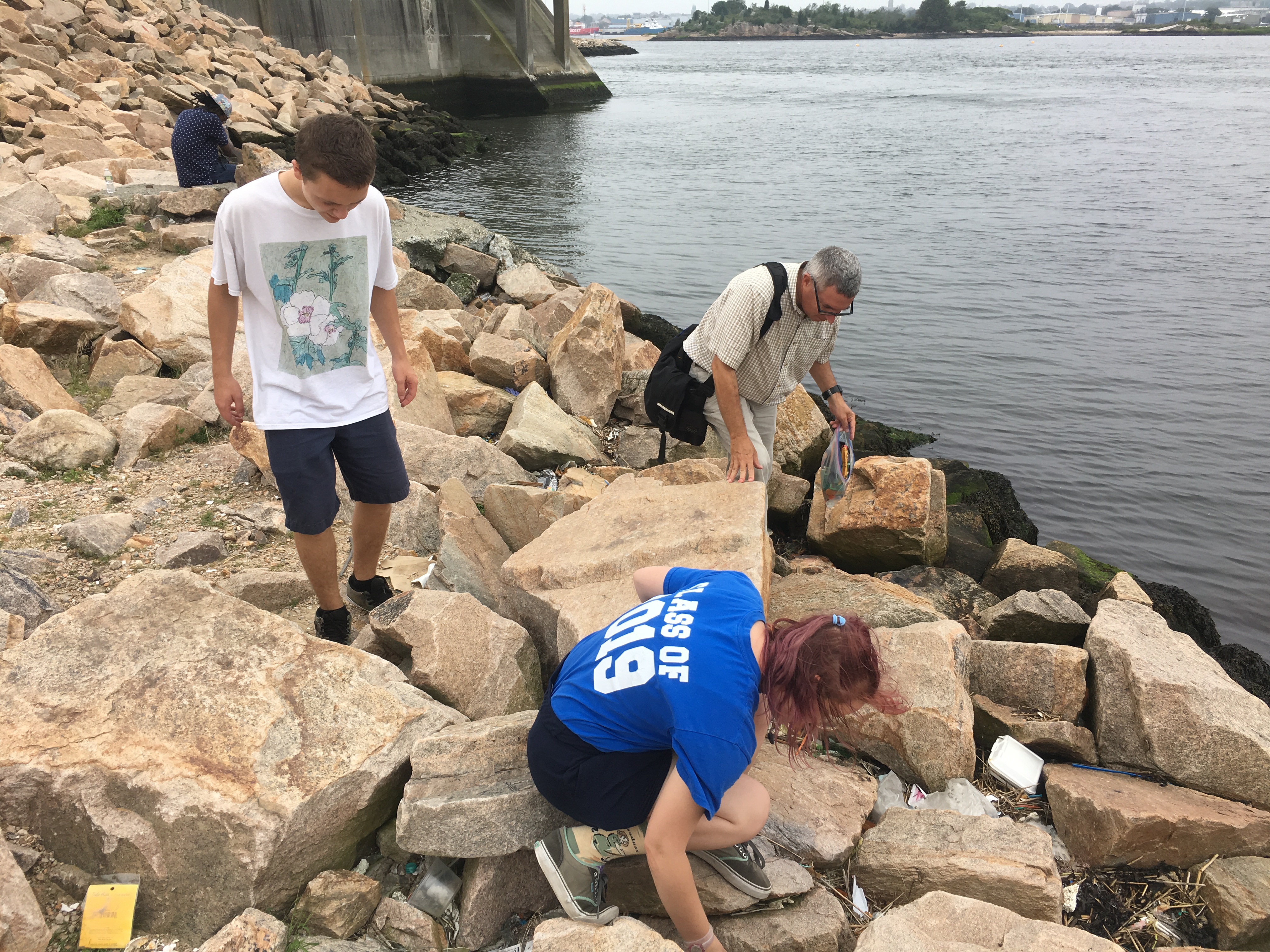 We sat on the rocky slope of a hurricane barrier at Fort Phoenix beach, enjoying the ocean view. It was a misty afternoon and not the sunlit August weather we expected. Mark pointed to the water, explaining that as a teenager this was his favorite spot for swimming and diving. It was peculiar to think of Mark Dion, now a major contemporary artist, being our age and jumping off cliffs with friends. As Mark shared his story, I looked below my feet and saw a red object peeking out from between rocks. I recognized it to be an inhaler, an odd item to find on a beach. Jokingly, I asked Mark if he wanted it, knowing his artwork incorporates found objects. I expected a laugh, but Mark instead accepted my offer and handed me a plastic bag to grab it. Within minutes, all of the Teen Arts Council had climbed down the dike’s boulders to search for hidden treasures with Mark Dion. Onlookers may have thought we were collecting beach trash. However, we saw ourselves as studio assistants, finding colorful pieces of plastic Mark would hopefully incorporate into his art at the ICA.

This fall at the ICA, Mark Dion’s exhibition Misadventures of a 21st-Century Naturalist will become inspiration for our youth events: The Current and Teen Night. To prepare for these events, Teen Arts Council had the exclusive opportunity to tour Mark’s hometown. Over the course of our two-day adventure in New Bedford, TAC visited Mark’s home, explored museums, bought antiques, and yes, even collected beach trash with the artist.

Arriving in New Bedford, TAC first met [he greeted you, really] Mark at Mac’s Soda Bar, one of his favorite lunch spots. With stomachs full of quahogs and lobster rolls, we then stopped by Mark’s summer home. To reach his house, we walked down a long gravel road adjacent to a corn field, cow farm, and other barnyard animals. For city kids, these were unusual sights. As we walked, Mark acted like a true naturalist and pointed out various plant species. At the end of the road, we reached Mark’s cozy house with a gorgeous view of a saltmarsh and the sea. He brought us to the back deck where a table was covered in sea glass, rocks, and pottery fragments. These items collected from the beach would soon make their way into Mark’s artwork. Situated in the back room of his house, was [the clause before the comma modifies whatever comes right after it] Mark’s makeshift summer studio. In the studio, Mark was working on transforming modern objects like a cellphone into ancient sea relics. Finished pieces from this series are often shown in museums, but for TAC it was just as interesting to see them in an unfinished state.

Leaving Mark’s home studio, we then went on a historical walking tour of Fairhaven, a neighbor of New Bedford. As we entered the town’s library, Mark reminisced about the times he spent there as a child, reading books about science and nature. Following this town tour, we went to Fort Phoenix, where TAC helped Mark collect from the beach.

Starting the day at Mark’s studio gave TAC an intimate view into his working process and life style. We saw the ocean he collects specimens from, the room he creates art in, and the space where he spends time with family. The day then went on to show us the places that inspired him as a child his process for collecting objects. Following Fort Phoenix, our first day in New Bedford concluded at Martha’s Stewart's favorite Portuguese restaurant, where TAC had dinner with Mark’s family.

Day two of our adventure began at the New Bedford Whaling Museum. Mark arranged for the curator to lead a tour explaining the history of whaling in New Bedford. Surprisingly, the museum also featured art exhibits centered around knot tying and their large scrimshaw collection. Overall, the museum had a very interdisciplinary approach to the concept of whales and the whaling industry. The museum viewed the subject matter in terms of its social context, biological impacts, and utilization in art. While Mark’s art was not present in the museum, it was clear how the museum inspired his work.

During our second day, we also visited the New Bedford Art Museum. Here we viewed their main exhibition Plunge, which explores water and the ocean through the lens of an artist. This show was another example of art being combined with the study of nature. This museum also exhibited lifesize bird paintings by the naturalist John James Audubon. By bringing us to this museum, Mark continued to show us the ways science, art, and history overlap.

After our museum visits, we moved on to finding collectibles of our own at a New Bedford antique shop. TAC quickly scattered throughout the store, trying on vintage clothes, flipping through dusty books, and playing songs on heirloom pianos. After exploring the shop for hours, TAC reconvened to share their takeaways. Mithsuka left with a porcelain doll to paint, Nick found an assortment of toy cars to restart a childhood collection, and I picked up a book on carpets to learn about an interest of mine. Mark also left with a variety of objects, including a case of miniature seashells, possibly to become a part of his artwork.

Our second day in New Bedford focused less on Mark’s own artwork, but still left us thinking about the connections between art and science. With these ideas in mind, TAC then became collectors like Mark at the antique shop. We left with objects that corresponded to our interests and that could become part of our own artwork.

For most traditional artist encounters, TAC conducts filmed interviews in the gallery with an artist, or spends a few days making art at the ICA. However, our artist encounter with Mark Dion was a little different from our past meetings with artists. Instead of just exploring Mark’s artwork at the ICA, we adventured into Mark Dion’s New Bedford, experiencing firsthand the places that inspire him as an artist. 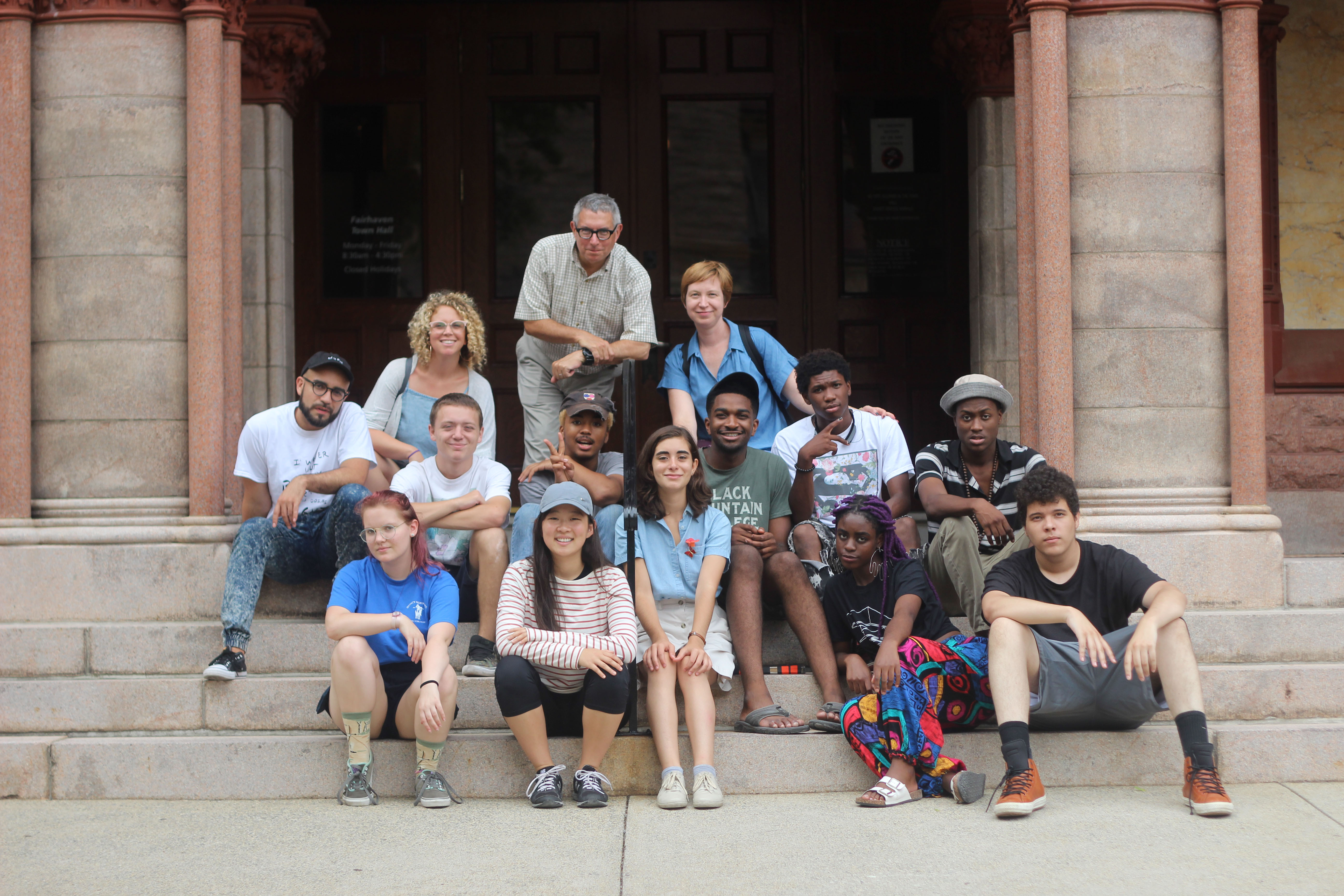